AlliedModders now hosts some of its repositories on Git, at: https://labs.alliedmods.net/

Git, like other version control systems, has a few concepts important to working with source code:

AlliedModders uses GitLab for repository hosting and code review. GitLab allows you to "fork" a repository, which gives you your own hosted copy where you have write access. After forking a project, you can make changes, then submit a "merge request" for the original developer to accept them back. For Git projects, we use this workflow instead of patches.

If you have either forked an AlliedModders project on GitLab, or you are a developer with write-access to one of our repositories, you should clone a repository like so:

Substitute your forum username for USER, and if you're cloning a fork, the path to your fork rather than the upstream repository.

If you just want read-only access, you can use:

Code reviews and patch submission should take place on GitLab. Bug reporting and issue tracking, if needed, should still occur on Bugzilla. Most of the time, you will not need to use Bugzilla. If you just want code reviewed and checked in, you can use GitLab.

With Git, all work is usually done in branches. A branch is a separate line of development that exists alongside main development. Branches have their own commit history, and can be merged back to the main line of development (called master). Branches can be deleted or shared. The crux of the Git workflow is as follows:

This is significantly less work than the Mercurial patch-sharing model, where patch files have to be exported into a bug tracker.

Now for the details. There are two workflows, one for AlliedModders developers and one for contributors. The processes are basically the same, but official developers can skip a few steps. If you are a developer, you can also choose to use the contributor workflow.

This is the default workflow. GitLab can host personal copies of other repositories for you, called "forks". To fork a project, log in to labs, then visit the project's page. For example, AMX Mod X is at https://labs.alliedmods.net/am/amxmodx. Just click the "Fork" button in the upper left, and you will have your own copy of the repository.

Once you have a fork, you can clone it and add the upstream repository as a remote source:

Whenever you are about to work on something, it's a good idea to sync your local repository to make sure it's up to date. For a more in-depth look at this, see syncing a fork. In short, you just need to do:

Now, let's say you want to work a new feature or bug called "EggAPI". First, create a branch for your work:

This creates and switches to a new eggapi branch, forked from the position of the previous branch. Use git checkout to switch branches, and -b to create new ones.

After you've made changes, use git commit to commit them. Note that unlike Mercurial, git does not recognize changes unless you stage them. For example, let's say I modify amxmodx/string.cpp. If I try to commit, or run git status, I might see something like:

This is because my changes are not yet staged as part of the next commit. To stage them, and then commit, I can do:

Once your branch is ready for submission, the next step is to create a merge request. First, push your branch back to Labs:

Then, visit your dashboard on GitLab. You should see a new entry under "Recent Activity", with a "Create Merge Request" button:

After clicking that button, you'll get a screen where you can pick the source and destination branches, write a description, and optionally assign someone to the merge. Here's what it might look like to merge my local "egg" branch into AMX Mod X master: 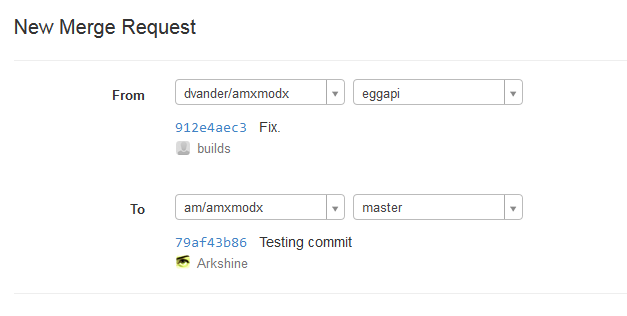 This will send an e-mail to the development team, and a developer can then review your changes and merge them into the master branch. GitLab will then provide a button to delete your branch, and you can also remove it locally with:

Congratulations! You're done. If a developer requests changes, you can commit, and push to your branch again. Note that GitLab won't tell the developer that you've updated your branch. It's a good idea posting a comment saying that your request is ready for re-review.

If you're an AlliedModders developer and have write-access to the official upstream repositories, your workflow is basically the same as contributors'. However, you have extra options available:

Git does not change the AlliedModders policy of requiring peer review for all code changes. Unless you are fixing a broken build, all patches should be reviewed by another AlliedModders developer. Previously, this meant exporting a patch file to Bugzilla. You can still do that, but it's a very burdensome process for both developers and contributors. For Git projects we recommend the Merge Request model explained earlier.

YOU HAVE THE POWER!!!! If you think you're qualified to review and merge a contributor's branch, go ahead! The goal of using git is to make the contribution process much more accessible, and fast response from developers is the best way, BY FAR, to keeping contributors.

If you're coming from Mercurial, here are some Git command equivalents. The basics are the same:

Instead of mq, you can use branches, which are usually much more convenient anyway, since you can just commit changes as you go and easily switch between them. Exactly replacing mq is out of this article's scope, but the tools exist.

If you have SSH Keys, you can set your GitLab profile to accept them. This is HIGHLY RECOMMENDED for AlliedModders developers. You probably already have a key with us, even.

Set up a good merge tool. We really like Beyond Compare, however, kdiff3 and meld are also good.

If you accidentally commit to master, you can copy the commit to a new branch, then erase the commit off master: