SourceMod has an extensive API for building and displaying menus to clients. Unlike AMX Mod X, this API is highly state driven. Menus are based on callbacks which are guaranteed to be fired.

For C++, the Menu API can be found in public/IMenuManager.h. For SourcePawn, it is in scripting/include/menus.inc.

The SourceMod Menu System is based on an object oriented hierarchy. Understanding this hierarchy, even for scripting, is critical to using menus effectively.

The top level object is a MenuStyle (IMenuStyle in C++). Styles describe a unique menu system. There are two such styles built into SourceMod:

Each MenuStyle has its own rules and properties. You can think of them as existing on separate "channels." For example, two different menus can exist on a player's screen as both a Valve menu and a Radio menu at the same time, and SourceMod will be able to manage both without any problems. This is because each style keeps track of its own menus separately.

Menu displays are drawn with a lower level interface called Panels (IMenuPanel in C++). Panels describe exactly one chunk of display text. Both selectable items and raw text can be added to a panel as long as its parent style supports the contents you're trying to draw. For example, the Valve style does not support drawing raw text or disabled items. But with a Radio-style Panel, you can display a large amount of on-screen data in your own format.

Panels are considered temporary objects. They are created, rendered, displayed, and destroyed. Although they can be saved indefinitely, it is not necessary to do so.

Lastly, there are plain Menus (IBaseMenu in C++). These are helper objects designed for storing a menu based on selectable items. Unlike low-level panels, menus are containers for items, and can only contain items which are selectable (i.e., do not contain raw text). They fall into two categories:

The purpose of Menus is to simplify the procedure of storing, drawing, and calculating the selection of items. Thus, menus do not allow for adding raw text, as that would considerably complicate the drawing algorithm. Note: The C++ API supports hooking IBaseMenu drawing procedures and adding raw text; this will be added to the scripting API soon.

Internally, Menus are drawn via a RenderMenu algorithm. This algorithm creates a temporary panel and fills it with items from menus. This panel is then displayed to a client. The algorithm attempts to create a consistent feel across all menus, and across all styles. Thus any menu displayed via the IBaseMenu class, or Menu Handles, will look and act the same, and the Menu API is based off the Panel API.

Menus are a callback based system. Each callback represents an action that occurs during a menu display cycle. A cycle consists of a number of notifications:

Since End signifies the end of a full display cycle, it is usually used to destroy temporary menus.

A detailed explanation of these events is below. For C++, an IBaseMenu pointer is always available. For SourcePawn, a Menu Handle and a MenuAction are always set in the MenuHandler callback. Unlike C++, the SourcePawn API allows certain actions to only be called if they are requested at menu creation time. This is an optimization. However, certain actions cannot be prevented from being called.

For panels, the callback rules change. Panels only receive two of the above callbacks, and it is guaranteed that only one of them will be called for a given display cycle. For C++, the IBaseMenu pointer will always be NULL. For SourcePawn, the menu Handle will always be INVALID_HANDLE or null.

First, let's start off with a very basic menu. We want the menu to look like this:

We'll draw this menu with both a basic Menu and a Panel to show the API differences.

Note a few very important points from this example:

Our finished menu and attached console output looks like this (I selected "Yes"):

Now, let's rewrite our example to use Panels instead.

As you can see, Panels are significantly different.

Our finished display and console output looks like this (I selected "Yes"):

Now, let's take a more advanced example -- pagination. Let's say we want to build a menu for changing the map. An easy way to do this is to read the maplist.txt file at the start of a plugin and build a menu out of it.

Since reading and parsing a file is an expensive operation, we only want to do this once per map. Thus we'll build the menu in OnMapStart, and we won't call CloseHandle until OnMapEnd.

This menu results in many selections (my maplist.txt file had around 18 maps). So, our final menu has 3 pages, which side by side, look like: 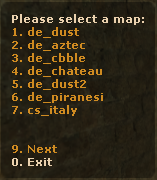 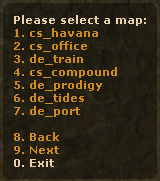 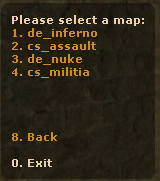 Finally, the console output printed this before the map changed to my selection, cs_office:

Displaying and designing this Menu with a raw ShowMenu message or Panel API would be very time consuming and difficult. We would have to keep track of all the items in an array of hardcoded size, pages which the user is viewing, and write a function which calculated item selection based on current page and key press. The Menu system, thankfully, handles all of this for you.

SourceMod also has API for displaying menus as votable choices to more than one client. SourceMod automatically handles selecting an item and randomly picking a tie-breaker. The voting API adds two new MenuAction values, which for vote displays, are always passed:

The example below shows has to create a function called DoVoteMenu() which will ask all clients whether or not they would like to change to the given map.

Selecting the "ExitBack" option will exit the menu with MenuCancel_ExitBack and MenuEnd_ExitBack. The functionality of this is the same as a normal menu exit internally; extra functionality must be defined through the callbacks.

It is only necessary to close a menu handle on MenuAction_End. The MenuAction_End is done every time a menu is closed and no longer needed.

It is possible to dynamically translate menus to each player through the MenuAction_DisplayItem callback. A special native, RedrawMenuItem, is used to transform the text while inside the callback. Let's redo the vote example from earlier to be translated: